What is SSD Web Hosting (High Speed Hosting) and why you need one?Tweet This

Hard disk plays a very important role for a web server. Majority of hosting servers use a hard disk drive (HDD) for file storage. But in recent years, web hosting companies have begun to use SSD as the primary drive. Let’s see what is a HDD and what is a SSD.

HDD stands for Hard Disk Drive. A hard disk drive consists of a rigid disc made with non-magnetic material, which is coated with a thin layer of magnetic material. That coating stores your data. The disk spins at a high speed and a magnetic head mounted on a moving arm is used to read and write data. This spinning action leads to delayed response time and a humming noise of a computer. HDD can be used for many years without problems.

SSD stands for Solid State Drive. Unlike the HDD, the SSD do not have moving parts, and data is stored on interconnected flash memory chips. Since there are no moving parts involved in read/write requests, the SSD has better transfer speed and better performance than HDD. Additionally, a chance of losing data by some small mishandling is less. SSD can function in extreme high and low temperatures along with its ability to withstand extreme shock and force. Hence, your data is extremely safe with SSD.

Why you need SSD Web Hosting?

A fast loading web site is the key to a better user experience. Nobody likes to wait for service. So, even a 1-second page load delay can loose 7% potential customers. Also Page load time is  obviously an important factor of search engine ranking.

There are many factors that affect the Page Load Time. Choosing suitable hosting for your venture is the first step in starting a website. Leading web hosting providers are using various technologies to boost their hosting speed. Using SSDs is one such method which increase the page loads faster and bring their customers a better web hosting environment. 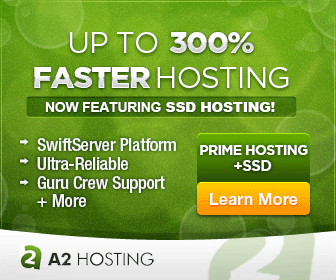 Why should I care about A2 Hosting company for SSD Hosting?

You can see full review of A2Hosting here

So what does it cost me for SSD Hosting?

$3.92/month. And for a limited time A2 Hosting is offering a coupon 51SPEED (to save on your first invoice).